, /PRNewswire/ -- ("Foundation"), jointly established by (the "Company" or "") (NYSE: YUMC) and the , awarded research grants to seven initiatives which aim to improve the eating habits of Chinese people. A symposium convening scientists, scholars and experts was also held in to discuss and share cutting-edge research in the spheres of nutrition, health, and dietary habits in . 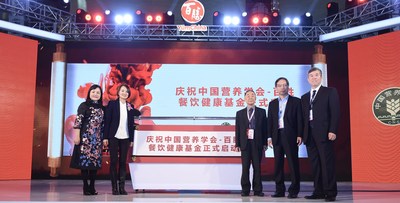 This year, the Foundation assessed over 100 applications and awarded research grants to seven flagship initiatives, including projects proposed by Huzhong Li of the and of the health and nutrition unit at the .

, President and Chief Operating Officer of , said, "As China's largest restaurant company, has always been committed to providing consumers with food that is both nutritious and delicious. We will continue to play an important role in advocating active, healthy lifestyles, and enhancing understanding of well-balanced diets in ."

Professor , Vice Chairman of the , expressed his gratitude to the team of experts led by , the ("CRCF") and Dr. , an academic at the to the , for their outstanding contributions to the promotion of scientific research into dietary health over the past decade. Professor Yang pledged to partner with to conduct high-quality research into these topics and to advance the understanding of nutrition and healthy diets in .

In a keynote speech, Dr. noted that the Foundation's goals are aligned with government initiatives including Healthy China 2030 and the National Nutrition Plan 2017-2030, which are designed to raise the level of health literacy and improve the diets and health of Chinese people.

This is the 10th annual nutrition symposium that has hosted. In 2007, and the CRCF established the . In , partnered with the , top professional organization dedicated to the research and application of the healthy nutrition practices, to form the . The newly formed Foundation will continue the work that was started by the .

Alice Wang, Senior Vice President of Public Affairs of , said, "It has been an honor to collaborate with the over the past 10 years to expand the breadth and depth of nutrition and dietary research in . Through our new partnership with the , we look forward to building on this foundation and making an even greater contribution to nutrition research and education in ."

is also committed to tackling issues of malnutrition among children in poverty-stricken regions in . Now celebrating its 10th year, Donation program, founded in partnership with the , has raised over , provided over 35 million nutritional meals and funded 840 "", benefiting more than 500,000 children across ten provinces in .

is a licensee of in mainland . It has exclusive rights in mainland to , leading quick-service restaurant brand, , the leading casual dining restaurant brand in , and , which opened its first restaurant in at the end of 2016. also owns the Little Sheep and East Dawning concepts outright. is well positioned for growth thanks to its strong competitive position, integration of its brands into Chinese popular culture and consumers' daily lives, expanding geographic footprint in and existing operational expertise. It has a strong capital position, no external debt and expects to continue growing its system sales and profit by adding new restaurants and through growing same-store sales. had more than 7,700 restaurants and more than 420,000 employees in over 1,100 cities at the end of . A new generation of younger consumers who are digitally sophisticated and brand driven are fueling growth in consumption in . The ongoing growth of the middle class and urban population in is expected to create the world's largest market for restaurant brands, with poised to be the market leader.